We challenge misconceptions about the hymen 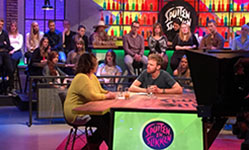 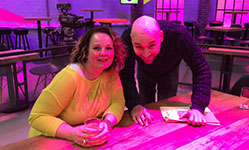 Dutch TV program ‘Spuiten en Slikken’ tends to deal with sexual taboos. Hence, it was no surprise that Luuk Heezen, one of the program directors contacted ‘Mythe Ontkracht’ (Myth Demystified). They were searching for a Muslima who wanted to share her personal story. ‘Mythe Ontkracht’ was the right place to go, as our foundation has a network of brave women who are willing to tell their story and contribute to the demystification of the hymen. Suzan Apler was a perfect ambassador for this TV show.

Suzan told how her father had coerced her into a marriage with a 22 year old Turkish man when she was 14; as her father believed she was promiscuous. During her wedding night, her family-in-law was waiting for the bloody sheet behind the bedroom door. As there was no blood on the sheet, the groom tried to make her bleed for three consecutive nights. When he was not successful, they resolved to take her to a doctor. It was a tense situation and Suzan understood that her life was at stake. To her great relief the doctor gave her a declaration of virginity. According to the same doctor she would bleed at a later moment.

During the show the misconception of bleeding as proof of virginity was addressed. The website of ‘Spuiten en Slikken’ also deals with the topic and refers to our website (http://spuitenenslikken.bnn.nl/nieuws/artikel/892).

Seminar on virginity for boys, at the ‘Internationale Vos’ in Schiedam, May 29 2014

Twelve boys from Eritrea, Somalia, Bulgary and Turkey attended the seminar by Germain Akkerman and Ines Balkema. Many of the boys were not familiar with the information they received about virginity. For a number of them it was confusing to learn that bleeding is not a proof of virginity and that the hymen is not a piece of tissue that covers the vagina. Germain Akkermans explained that many people are not familiar with the medical facts. It is understandable that these facts are confusing to people that have always been presented with conflicting information. He asked the boys if they knew how menstrual blood left the female body. Clearly an opening is needed. Germain then explained that, when the tissue does cover the vagina, a rare condition, a simple medical procedure is needed to prevent the blood from accumulating.

The seminar was organized by ‘Mythe Ontkracht’ (Myth Demystifed) and conducted by Yodit Jacob en Anne Hoogendoorn of No Game, part of Pharos (www.no-game.nl). Fifteen girls, ages of twelve through sixteen, attended. No Game defines female circumcision as a procedure involving the external female genitalia for non-medical reasons. Female circumcision is practiced in twenty-eight countries. This includes Asian countries and people from non-Islamic backgrounds. There are multiple variations.

What are the consequences of female circumcision?

Complications during menstruation, sex and childbirth. Pain while urinating, prolonged urination, and drop by drop urination. Abdominal pain caused by the accumulation of menstrual blood.

In the Netherlands 16.000 girls are at risk of being circumcised. If you are afraid that you will be circumcised, you can get help. You can tell your teacher, a friend or someone you trust. A declaration against circumcision can be formulated for you.This needs to be signed by you and another party (your teacher for instance). Your parents can show this declaration when on holiday in Eritrea or Somalia or in another country, and indicate that, as it is illegal in the Netherlands, they are at risk of going to jail.

The seminar was concluded with a movie: ‘My sis Will be safe’ http://bit.ly/12ZRBlu. Currently No Game is not organizing any seminars or workshops and it is not possible to invite one of their representatives.

Cemil started by asking the audience who knew what the hymen looks like. He received various answers. Some believed that the hymen was a closed tissue, others thought it was a tissue with small holes in it. Cemil explained that a female fetus has a closed hymen that slowly tears during growth. Eventually, all that remains is a fringe of tissue around the edges.

As the hymen usually is only is a fringe of tissue, it no longer needs opening or tearing during the first act of sexual intercourse. Hence there will be no blood. Four out of ten women do not lose any blood when they lose their virginity. Additionally, a woman who is not a virgin can still lose blood during intercourse. A woman who is afraid or feels forced can tense up and contract her pelvic muscles, as the vaginal wall is thin and has blood flowing through it, the chances of blood loss are high.

All men who attended the presentation had children. However, they were uninformed about the hymen. They had all been receiving second hand information on the topic. Cemil indicated that it had been the same for him. The men where grateful to receive information from an expert on this sensitive topic.

Mythe Ontkracht (Myth Demystified) had a stand at this convention, which was for girls age thirteen through twenty-three. A total of 150 girls and professionals visited our stand. Korrie Loures, member of the city council, was among them (see first picture). She is fully supportive of our activities.

Various professionals (Dock, TOS, Jongerenwerk Capelle a/d Ijssel) expressed their interest in our seminars, as they often deal with this topic. A guy with connections in Indonesia visited our stand. He had been shocked by the number of Indonesians who still believe in blood as proof of virginity, and was happy to learn about our plans to translate our site into English.

On April 4, the SPE organized a networking gathering on self- determination named “Vrouwen onder elkaar” (Women among each other). The event was for women only. The event was initiated and opened by Andre van Es, Member of the City Council. She considers it a topic of great importance.

After the opening, singer and actress Merel Polat, played a scene from the play ‘Veiled Monologues’. Following her performance, four brave women were asked on stage to talk about sexuality and self-determination: Jarina Hamidullahkhan and Naima Daali from Mythe onkracht (Myth Demystified), and a Dutch and a Ugandan lady.

Naima was interviewed by Meral. She talked about the importance of virginity in Morroccan culture. Jarina ended the discussion by addressing the suicide problem in Hindu society and that fact that their isolation makes it difficult to seek help. She indicated that social media can play an important role, as youths find and help one another through these media.

Sexologist Cemil Bozkir explains that not all girls bleed as they lose their virginity. About four out of ten don’t lose any blood. He then explains that the hymen is not a closed tissue. When the tissue does cover the vagina, a rare condition, a small medical procedure is needed to prevent the blood from accumulating. Without an opening women would not be able to menstruate. To support his story, he shows pictures of genitals of both a male and a female fetus of 5 weeks old. These pictures show similar genitals and both clearly have an opening.

Toward the end Cemil asks if anyone believes that bleeding proof of virginity. Two men indicate that they are still not convinced otherwise. They are from the Moroccan countryside, where “all women bleed”. Cemil explain the tricks girls may use to bleed and agrees that six out of ten girls do really bleed. However this does not mean that bleeding is proof of virginity.

A week later Mohammed Belkassem, who had organized the event, called Ines Balkema (Chair of Myth Demystified Foundation). He informs her that, as a result of the information provided by the sexologist, except for one, all men are convinced that bleeding isn’t proof of virginity.

Designed by For Your Documents.